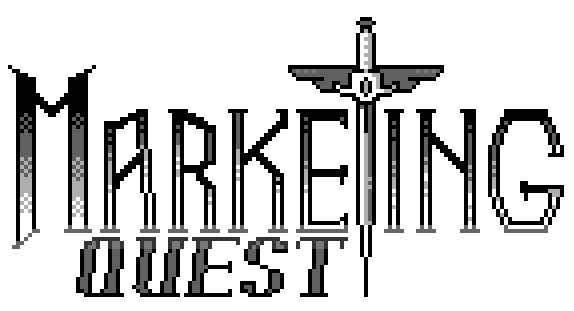 It's been one month already, so pack your sword and fill up your jars with fairies, it's time to head out on another Marketing Quest!
Firstly, if you missed part 1 of Marketing Quest, go check it out here.

Part 2
Last time on Marketing Quest, we took a look at different things that we could be doing to help get our games in front of people, and decided to use things such as Facebook likes and Twitter followers to track their progress. A better number to use would be game sales, and as my game Amp, Watts & Circuit is released on the iPhone and iPad on the 13th September, I should be able to do this going forward, but for the first two articles it isn't really possible. Lets take a look at the goals I set myself from what I learned in Part 1, and what difference my actions have made.


Going Places
The first thing that we looked at was going to game events and other social meetups to meet developers and get feedback on your game. This is one that I was already doing, as being based in Birmingham there is a fair amount going on for me to attend. However the impact on this in terms of sales will most likely be minimal, so don't head to these events with your sales hat on, unless you are sure that it is customer facing. From my experience this sort of event is mainly attended by other developers, so it's brilliant for making new friends and getting feedback on your work, which of course should lead to a better product in the end, but not so much for gaining a new fan base.

However, you might be able to share your network of potential customers with your friends to cover more people and help get more sales, as never forget that as independent developers we are not in competition. Working together, be it through Twitter, cross-blog posts or even good old word of mouth, there is no reason why we shouldn't be helping each other out.


Social Networks
Previously we took a look at how good websites like Twitter and Facebook are at keeping people up to date and connecting with your audience. I still strongly believe this is true, and get brilliant feedback and comments from people on the Jamo Games Facebook page. However, while talking to your audience has never been easier, this doesn't solve the problem of bringing in new people and expanding your audience, but goes more toward making people who are already interested in what you do more engaged and more likely to make a purchase of your next project, which is a great thing in itself.

I have also tried to become a more active member of the TIGForums, and have been posting all of my game updates there, trying to join in on other conversations and help out other developers when I can. I think the problem here though is similar to the problem with the events, you are mainly taking to other developers. Maybe slightly less so, but the pros and cons of something like this are similar to both.

About you
This one is definitely still up for investigation, as I didn't write any articles about myself during the time between this and the previous article, but I should have. Getting to know the developer, especially in smaller companies, is really important, it gives people something to get behind.

It isn't just small companies that do this though by any means, even huge companies have what is called their Marketing Story, something that makes you get behind their cause, to show that you believe similar things.

I think that partly the reason that I haven't done this is that I am still figuring this out for myself, being able to put down into words why you are doing something, why it is so important to you isn't something that I find easy, but being forced to do it for something like an article might help me to figure these things out for myself.

The Plan
Lets take a look at the plan that I made for last month,
3 Game related posts per day
3 Blog Posts Per week1 Video every two weeks
Sync all new info (videos and blog posts) to Facebook, Twitter & IndieDB

So far so good, I managed to do pretty much everything that I set out to do, except for the video, I only produced one, not two. Overall I'm not sure that it matters, but I like to stick to targets that I set myself. Let's also take a look at last months stats -

and compare them to this months -

Woo I levelled up! You can see that I increased the amount of everything, which means that something must be working, although what isn't on here is number of blog views, which went up massively. I was really happy that people seem to enjoy the posts, though the ones that are related to my games have the lowest amount of views, so I need to make the site more engaging somehow so people (such as yourself!) get the urge to check out my games after reading the article.

For now I'm not sure if they are good or bad figures, but they will at least give me something to compare with next month!

My Marketing Quest goal for this month is to keep up what I am doing, to try to increase those numbers I worked out above, and to try and figure out how to connect more with the gaming public, as opposed to mainly developers. There are a lot of people out there, so some of them must be interested in my games right?

My personal goal is to be able to write more openly about what I am doing, why I am doing it, and to figure out exactly what Jamo Games is all about. Its really important to me that I figure this out and has been playing on my mind a lot, although I am sure it will come in time, as I do more work and get more experience under my belt!