Meant to do this a bit more often than I have been, so I'll try to remedy that, but for now, here is the Dr. Bones update!

There are now a bunch of traps in the Tibet and Egypt zones that weren't there before. The idea is to make each zone as different as possible, with mechanics that differentiate them from each other. I don't want to give away every new mechanic in the game, as that would spoil the fun of playing them for yourself, but I can share some of them with you now.

I'm sure that by now you have seen a yeti that will run after you if you are too close. You may have been wondering where yetis come from, or why there are only adult yetis. Most likely you haven't, but I think about these things. Now you can lay your worries to rest, as children yetis are now here to pelt you to death with snowballs! Much better..

This is the sprite sheet for the yeti. A snowball is created when he is on frame 14, which kills Dr. Bones if it hits him. 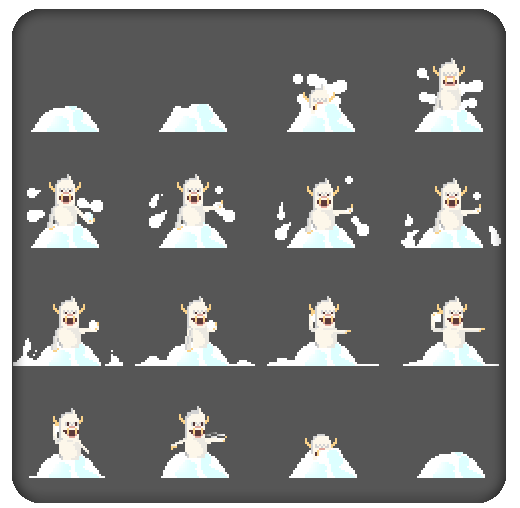 The flame pillar is featured in the Egypt zone, and acts like the normal pillar, except that it will kill the player if you touch it, so it requires a bit more precise control to get past compared to the normal pillar. Fire is a tricky thing to animated, and I was pretty happy with how this turned out. I took a look at games that really know how to do pixelated fire and explosions, like Metal Slug. Here is the animated fire.

You might notice that the animations looks cut off along the top. This is because it needs to fit within the space between the two platforms, I didn't want the flame to spill over into the upper level. I might put some pixel art or animations tutorials together when I get some time if someone requests it, or a study of pixel animation from other games, as it is something that I am pretty much doing anyway, but without the write up!

There is also a bunch of other new stuff that I will post over the coming week, but for now its back to work! I hope you like what you see, please drop me some comments with what you like, what you don't and what you would like to see Dr. Bones up against!